Note: This review is free of major spoilers for Episode 3 and the previous episodes in the series.

Episode 3 of Life is Strange definitely marked a high point for the series. Chaos Theory brought some interesting elements into the mix and left gamers with a thoroughly unexpected cliffhanger. While the issues from the previous episodes still hurt Chaos Theory, the compelling narrative more than redeemed it.

The climax of Episode 2 meant that players faced a variety of consequences, particularly the survival of one major character. In the wake of these consequences, Max Caulfield continued on her quest to save her town from destruction by a freak tornado. Max and Chloe attempted to uncover the mystery surrounding the disappearance of Rachel. The interconnected events and characters in Arcadia Bay meant that Max and Chloe had a lot of investigating to do.

The titles are NEVER subtle

One of the stronger aspects of Chaos Theory was that the writers went for depth in the story. There were no new characters shoehorned into the narrative and we finally saw the beautiful relationship between Max and Chloe utilized to its highest potential. Chloe’s confrontation of her inner feelings was one of the highlights of this episode. Max playing the psychologist was a lot of fun as the player was able to choose what to say. When I played the previous episodes, I frequently wondered why Max and Chloe would continue to be friends if the plot had not dictated it. In Chaos Theory, both characters were developed naturally and the conversations and choices also presented their relationship in a new light. In fact, one of the major choices in this episode was built around their relationship. Although some may claim that this choice was forced, I believe that it existed to highlight the strength of their friendship.

Furthermore, the character development in this episode was very strong. Aside from Max and Chloe, we learned a lot about Rachel. The developers must be commended for making me care about a character I haven’t even met yet. From memorabilia and conversations, we were able to piece together a portrait of Rachel as a character. This gave us some insight as to why Chloe is motivated to find her. Similarly, we also learned more about David through a fetch quest. We learned about the things that he held closest to his heart, which ultimately made a major choice about him much harder. We even learned about Joyce and she was barely on screen this episode.

The dynamic duo’s legally dubious investigation paid off as they learned new things about the myriad of colorful characters in the school. The focus on a compelling story meant that there was only so much that the developers could do with gameplay. The return of fetch quests elicited more groans from my friends and me. Puzzle solving had never been the strongest aspect of these episodes, and Chaos Theory did little to improve on this front.

At the same time, the developers managed to come up with innovative ways to use their unique rewind mechanic. The sequence in the diner was engaging as the player had to utilize Max’s rewind power to get the keys to Frank’s RV. The facts learned from the conversations with the characters in the diner were used to manipulate those very people into revealing more secrets. These secrets were not only used to achieve Max’s objective, but also contributed to the development of some of those characters, especially Nathan and Frank. We learned about a certain character’s love for animals and another’s relationship with his father. Needless to say, there was an abundance of information about major characters like Rachel and David, some of which was already known and some of which was almost shocking. 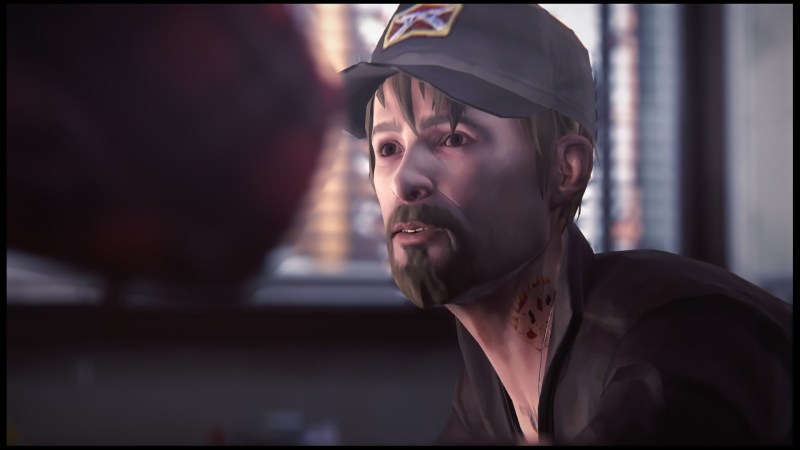 I WAS EATING THOSE BEANS!

Additionally, the biggest revelation I had was that the rewind mechanic no longer felt like an alternative to save scumming (which I do whenever I play a Telltale game); rather, it had been seamlessly integrated into interactions between characters. For example, Chloe could be seen asking Max if she used her powers, even though she couldn’t have known if she did. The game seemed more self-aware in this regard, and it definitely helped in the player’s immersion.

Speaking of self-aware, there was one scene in which Chloe actually called out Max for her use of ‘hella’. While the lip sync issues and the awkward dialogue had not changed, they had almost become endearing, especially in the case of the latter. These problems were no longer distracting, as I felt myself overlooking them. The lazy animations were sometimes more troubling. I hope Dontnod is attempting to rectify these problems as they seem to be the only noticeable issues in the game; they essentially hold back an otherwise splendid game.

Her eyes seem glitchy at times

While the choices in the previous episodes had some weight to them, the major choices in Chaos Theory did not. Incidentally, one of the major choices was bizzare. This choice led to a very unnecessary death which just seemed strange and out of place in the game. Even the other choices were not beefy enough to warrant an emotional response from me. While this decreased the pace of the story, which was necessary after episode 2, it was disappointing to see a lack of interesting choices.

As always, the artsy textures and the acoustic soundtrack were expertly used to create an atmosphere unique to Life is Strange. They perfectly complemented the teen angst and moral dilemmas presented to the player. The hand drawn textures continued to be a major selling point of the game. Also, I was fairly impressed by the lighting in the game. While it was subtle most of the time, the level of expertise in the lighting system was evident from many scenes that included sources of light ranging from lamps to cell phone flashlights.

The level of detail is amazing

I would be remiss if I didn’t mention the shocking ending to the episode. Max discovered the true extent of her power as she used her rewind power in a completely new way. She decided to change an event that would affect the people around her. When she got back to present, however, she found that her choice had led to a totally different reality, presumably due to the Butterfly Effect. This new timeline was significantly altered in many ways, but one gut-wrenching difference led Max and the player to gasp in shock.

The ending was not just for shock-value, as there was some foreshadowing that Max’s rewind ability would eventually leave her between a rock and a hard place. While I didn’t expect that ending, I am now thoroughly intrigued about what it means for Max. It also opens up new avenues for the story in this alternate timeline. Ostensibly, Max’s relations with other characters are different which would undoubtedly make interactions more interesting. At the same time, I hope the story eventually takes us back to the original timeline as I wouldn’t want my previous choices to be in vain.

Yeah, I was surprised too

On the whole, Dontnod definitely raised the bar for Life is Strange as Chaos Theory was the strongest episode to date. The character development and interesting use of the rewind mechanic were excellent, while the only significant problems were the voiceover issues and the awkward dialogue. Life is Strange has really found its voice now and continues to be a game that not only captures the lives of teenagers well, but also weaves an interesting narrative in this setting. I personally cannot wait for the next episode and I highly recommend gamers to purchase Life is Strange.

Roshan is an avid writer and was recommended by four out of five doctors. He loves watching TV shows, reading as many novels as he can, and generally surfing the internet. He would be a much better writer if he knew how to finish stuf